SFW: Shorts 22 is Open for Submissions!

Southampton Film Week’s annual short film competition is now accepting short film entries! The competition is open to all and offers freedom in theme and genre. The only limitations set are the length of 10 minutes (including titles and credits), that the film must have been made no earlier than January 2021 and that in the organisers’ opinion it is appropriate for a public audience. Submissions are accepted through FilmFreeway. 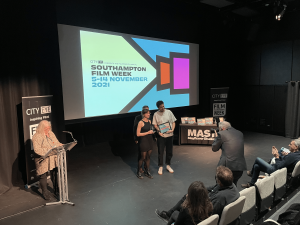 Filmmakers can submit their short films to any of the following categories: Best Fiction, Best Documentary and Best Artist Film. All shortlisted films will be eligible for the Michael Fuller Award for Best Film selected by our panel of judges, and the Audience Award voted for at the screening and awards ceremony during the festival. Filmmakers from Hampshire, Dorset, Wiltshire, Berkshire, Surrey, West Sussex and Isle of Wight will also be in contention for the Regional Filmmaker Award. Animation can be submitted to any of the three categories and in 2022 the festival, for the first time, will award a prize for Best Animation.

The SFW: Shorts film competition is run and organised by City Eye. The competition screening and awards event will take place in Southampton Film Week (SFW) between 11 and 21 November 2022. The final selection of all films presented at the competition is the responsibility of City Eye www.city-eye.co.uk